The orchestra was founded in 1945. Currently it is a unit subordinated to the Chief of the Inspectorate of Armed Forces’ support in Bydgoszcz. Commander--band-master is at present cpt.Dominik Sierzputowski, assistant—drum-major, Warrant Officer Andrzej Bogusz. For several years the band takes part in the cultural life in Torun and its surroundings. Its most important tasks are the performances At military ceremonie. Numerous musicians are graduates of the Music Academies in Bydgoszcz, Poznań and Gdańsk.

The military parade performed in historic uniforms from the times of Duchy of Warsaw are an undoubted highlight for the audience. The orchestra receives always a lot of interests and successes also abroad. It already performed in Denmark and Germany. It took part in numerous festivals, gaining prizes i.e. „Kryształowa Buława” (crystal bulawa) and the Cup of the Minister of National Defense. Until now the orchestra performed about more than 11.000 concerts, shows and military parades. Mostly it performs Polish classical music and marches. Furthermore its repertoire contains the newest hits and popular music, which is very well received by the audience. The orchestra cooperates with a lot of regional cultural institutions, for example it inaugurated the 17th Opera Festival in Bydgoszcz taking part in the performance of „La Bohème” by G. Puccini. This was the beginning of a very important and effective cooperation with the opera NOVA in Bydgoszcz. For the orchestra itself and its artistic development the work with the excellent conductors Andrzej Knap and Maciej Figas is very important. It performs as well at the stage of the Filharmonia Pomorska im. Ignacego Jana Paderewskiego in Bydgoszcz. The orchestra recorded one album with some of its most loved music pieces 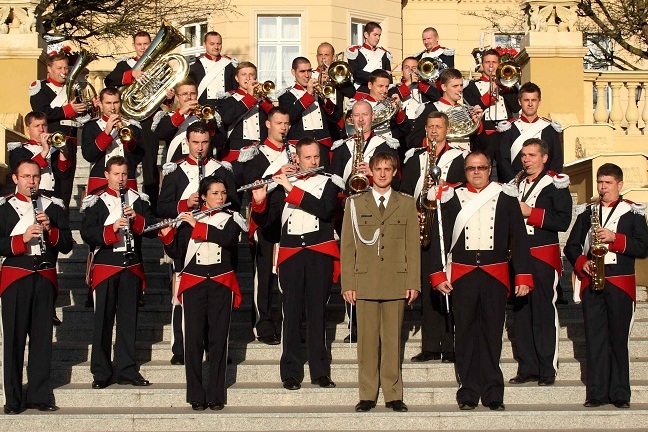