Wind Orchestra of the Town Leszno

The Wind Orchestra of the Town Leszno came into being at town authority suggestion in January 1994. It inaugurated its activity lending lustre to celebration of the 3rd of May Constitution anniversary. The conductor became a musician from the Poznań Philharmonic hall and the teacher of trumpet and trombone at the State School of Music in Leszno Zbigniew Śliwa. The orchestra acts in the Town Culture Centre in Leszno. Mr. Ryszard Jaśkowiak is the president of the board.

The members of the orchestra are musicians of the earlier Railway Orchestra and students from the State School of Music in Leszno. In the orchestra 150 musicians have played during the last 14 years. At present there are 40 musicians and 5 groups of majorets in which 85 girls are dancing.
The main field of the orchestra's activity is lending lustre to festive occasions, state feasts and also propagate the music culture in our town and region. It plays: march, parade, hymn, film, jazz and pop music. The orchestra gave concerts with excellent artists like Roman Gryń, Karol Bochański, Maria Zalanowska, Sławomir Cichor and the girl from Leszno, Iwona Dera.

There is also a music group active in the frame of the orchestra. In this music group the teachers from the School of Music in Leszno and experienced orchestra musicians act as instructors. In 2002 a group of majorets started its activity. It makes the concerts more interesting. Since 2003 Mrs. Katarzyna Czyżak has been managing this group. The majorets also perform dances with famous standards of world pop music.

The most important achievements of the dancing girls are: three “Gold Sticks” at the 4th, 5th and 6th International Music and Folklore Days, award at the 2nd International Festival in Frankfurt/ Oder, at the International Band Festival in Pecs and the contest to the German Mastership in Pritzwalk.

Next year the orchestra will have 15 years of existing. Its most important successes are: “Silver and Bronze Horn” and “Cristal Mace” at the International Music and Folklore Days in Leszno, Bronze Medal for the conductor at the 9th Band Festival in Szamocin, the award at the 2nd International Festival in Frankfurt/ Oder. 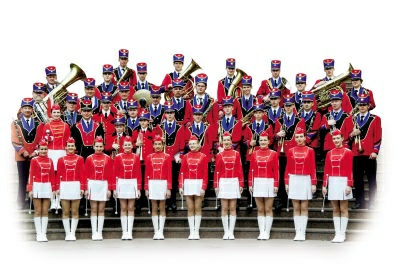